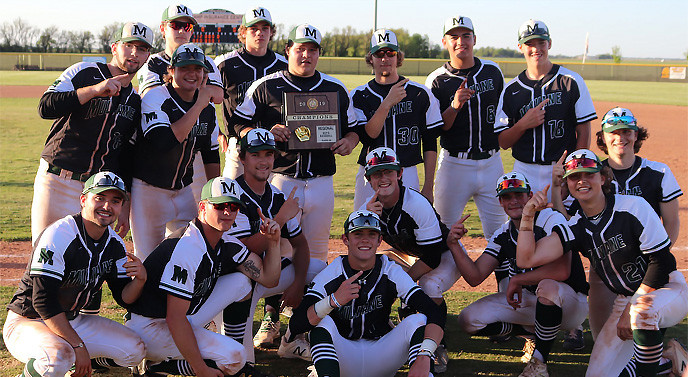 The Mulvane Wildcats Baseball team entered the 2019 regional tournament as underdogs, but through grit and determination the Cats came out as Regional Champs and are heading to Salina next week for the 4A State Baseball Tournament.

The Cats were the #13 seed in the West Regional, but the #4 seed in the individual 4 team regional, which means they had to face the number #4 seed overall (#1 seed in the 4-team regional) Andale. The Indians won the AVCTL D4 League with a 9-1 record and swept the cats earlier in the season.


Junior Hunter Dye took the mound and the Indians quickly jumped on the Wildcats with 3 runs in the first inning. The Cats came back and scored a pair of runs in the 2nd and 4th innings. Andale tied it up 4-4 in the 5th inning with 1 run. The Cats then scored 1 run in the 6th and 1 run in the 7th inning to go up 6-4. Andale scored 1 run in the bottom of the 7th inning but Hunter was able to get the 3rd out by striking out last years All-Metro Selection Caleb Hitt. Hunter pitched a complete game with 32 batters faced, 3 strikeouts, 4 hits, and 2 earned runs.


In the second game, the Cats got off to a quick start and scored a run in the 1st and 2nd innings, then scoring 2 more in the 3rd inning. The cats did not score the rest of the game and only gave up 1 run in the 7th inning to win the game 4-1. Senior Cole Schmidt led the cats and went 3 for 4 at the plate with 1 RBI, 1 stolen base, and 1 run scored. Freshman Hunter Seier and Gerlach both grabbed 1 hit at the plate and Gage scored 1 run. Diffenbaugh and Dye scored the other 2 runs for the Wildcats. Senior Caleb Heird pitched a complete game with 28 batters faced, 1 strikeout, 3 hits, and 1 earned run.

"I could not be prouder of the boys last night for how they played. We had a shaky start in game one and I challenged them to hang on and compete and they did exactly that. They won every inning from that point the rest of the night. Hunter Dye was lights out again as he has been every outing this year. And our senior Caleb Heird followed that up with a complete game 3 hitter of his own. I was so proud of how they battled and played defense and did whatever it took to get two wins. I feel like this was one of the first times all season we have played up to our mantra of “gritty beats pretty”. said Coach Nelson.

The 4A State Tournament will be held at the Dean Evans Stadium in Salina on May 23-24, 2019. At this time, the state bracket has not been posted.