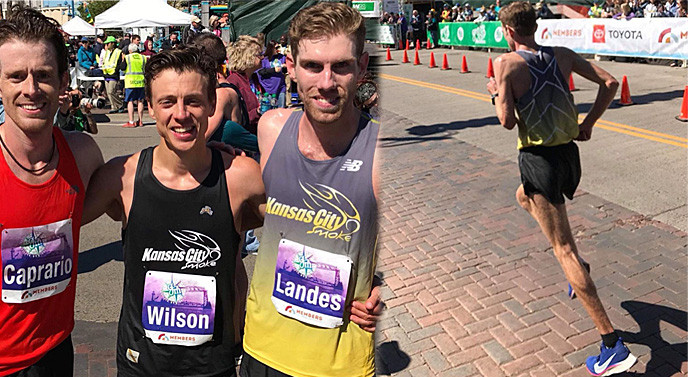 Former Mulvane Track and Cross Country standout Evan Landes (2011) is still running and focused on qualifying for the Olympics. Landes recently competed in the Grandma's Marathon from Two Harbors to Duluth, Minnesota and his 2:17:08 time (12th out of 6365 runners) was good enough for him to qualify for the Olympic Trials. In order to gain entry into the trials, men have to run a marathon in 2:19:00 or faster or a half marathon in 1:04:00 or faster. For women, the times are 2:45 and 1:13.

Evan's results from Grandma's Marathon can be found here.

"The US Olympic Marathon Trials is a race held on February 29th 2020 in Atlanta, GA. This race determines who represents the US at the 2020 Olympics in Tokyo.

Training for the marathon has been a real learning curve. After running two (my first was in Chicago last October) I still consider myself new at it but it’s an event I always knew I would move up to.

Coming into PA school I wasn’t quite sure what running would look like for me. I knew I wanted to continue to run and I had these big unfinished goals like qualifying for the Trials but PA school in and of itself is a big challenge, so I’ve just tried not to put any pressure on my running and make sure that it remained something I enjoyed and not let it become a chore. I’ve had to be a lot more flexible and adaptable than what I was used to in the past and go through some pretty early mornings and train mostly by myself. I was actually hurt for most of the winter and got kind of worried about not being able to train a lot because I really wanted to make a go of running the Trials qualifying standard of 2:19 before I start rotations this fall, and I had two and half minutes to shave off my time.

Somehow though I’ve put together some of my most consistent training. For Grandma’s Marathon I was running in the mid high 80 mile per week range and got up to the 90s and topped out at few weeks of 100miles for the first time ever in the last 6 weeks of my build up. I did more longer runs than in the past with many 2 hour long runs and usually a medium long run during the week too. I think doing a little more volume got me used to running fast on tired legs and prepared my body to be a little more metabolically efficient for the last 6 miles of the marathon where the race really starts. I also got better at fueling on the run and after my first marathon I knew I needed to try to drink more fluids throughout the race.

As for the race itself, the conditions were near perfect. Duluth is a really scenic town and Grandma’s Marathon is a competitive and historic race with a point to point course along Lake Superior. It was mid 50’s, sunny, and we had a tailwind most of the way. The best part was that I had my one of best friends there to race with. We had the same goals and agreed to run together as long as we could and just work off of each other. We did exactly that. We were together pretty much until the last mile. Our pack started to string out after 20 miles and we started catching other athletes who had gone out too fast or where hitting the wall. After getting through a rough patch and getting to 24 miles I knew I’d hit the standard as long as I didn’t blow up. I think I got a second wind from that confidence and really just focused on keeping good form and started just competing to see how many guys I could beat and how fast I could run.

It was really awesome though to achieve this huge goal with someone else who has this shared experience and understanding of what you went through to get there. I think the biggest think I’ve learned from this experience is that there is no one path to success. If you’re passionate about your goals and willing to work hard you just have to keep finding new ways to make it happen and work through adversity along the way.

For future goals, I’m going to try to survive PA school and continue to be adaptable and have fun with my running. We start clinical rotations this fall which can be demanding at times so my main goal will be trying to get that set up so that I can have a shot at running my best at the Trials in February." said Landes

Evan attended Kansas University and ran cross country and track for 4 years where he amassed many accomplishments.