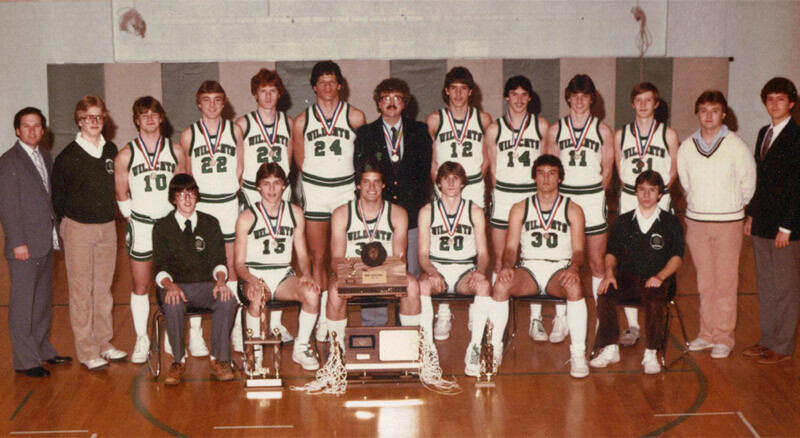 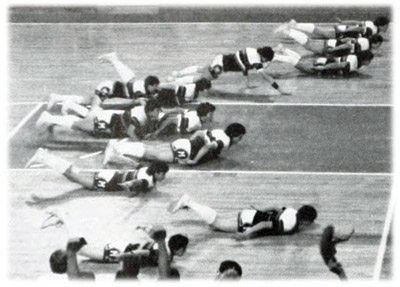 Coach Charlie Mason was in his 5th year as the Mulvane Men's Basketball team head coach, taking over the reins from Roger Pock in the 1979-80 season. Coming off an 8-12 season the previous year, no one knew what the Wildcats has in store for the 1983-84 season. What did they have in store? A program-best 24-2 season, a sub-state championship, and a 4A State Championship, the only state championship in the program's history.

The Cats faced off against Nickerson in game 1. Nickerson punched the Cats in the mouth in the first half, taking a 39-32 lead into halftime, but the Cats came back in the 3rd quarter, with Kevin Bell scoring 6 points, and Lonny & Todd Travis both scoring 2 before the Panthers were able to break the Cats scoring streak. The lead changed back and forth many times until 1:21 left in the game when David Belew dropped in a bucket to take the lead 61-60. Lonny and Todd Travis both scored 2 points each and the Cats won 65-60. Belew finished with 21 points, Bell with 16, and the Travis boys both with 10 points each, and Aaron Huslig finished with 8 points.

The Cats faced off against Tonganoxie in game 2. The Wildcats took a 16-13 first-quarter lead and then had a huge 14-4 second-quarter and went into halftime with a 30-17 lead. It was all downhill after that as the Cats held on to a double-digit lead the rest of the way and won 57-34. The senior Bell finished with a game-high 18 points and Lonny Travis finished with 12, Belew with 10, and Huslig & Todd Travis both finished with 8 points each.

The championship game found the Wildcats facing Topeka Hayden, who had beaten the #1 seed and unbeaten Concordia in the first round. The Wildcats jumped on them early with a 6-0 lead before they finally scored with 4:32 left in the first quarter. The Cats continued their strong defense in the second quarter and had a 16-6 lead at one point, but Hayden came back and closed the gap to 24-22 with 1:46 left. The Cats dropped in 6 more points before the half to take a 30-22 lead at halftime. The closest Hayden would get to the Cats in the second half was 48-40 with 4:40 left in the game. Belew made a steal at halfcourt, turning it into a 3-point play and Lonny Travis grabbed an offensive rebound and scored a bucket to take the lead to 53-40. The Cats never let the lead drop much after that and won the state title game 64-50. Lonny had a great game with 24 points, Bell finished with 14, and Belew finished with 13 points.

"It's a dream come true," said Coach Mason. "I've talked to a lot of coaches in the last few days who have been in the business a lot longer than me and some have never made it to the top. Some haven't even gone to the state tournament. We got a chance to go and made the most of it."

A magical season with Lonny Travis finishing with 425 points, Belew with 376 points, Bell with 333 points, Todd Travis with 272 points, and J.C. Shook with 101 points and lots of postseason awards:

The Wildcats repeated a trip to state 2 years later in the 1985-86 season but lost to Goodland in the first round and the Cats finished in 3rd place in 4A State in the 1986-87 season.

Coach Mason continued as head coach until the 1992-93 season when Coach Dale Landes took over the reins.